The programs that we've written so far have not involved input provided by humans. Either the data were hard-coded before the program was executed or they were established immediately before execution by  Merlin Mission Manager . Hard-coded data means that the data in question is embedded in the program as "code" and consequently cannot be changed without altering the program itself. While there are some circumstances in which this is sufficient (consider physical constants such as the gravitational constant G or speed of light c), in most cases this results in a program of very limited usefulness. (Consider a calculator without any buttons that only adds the predetermined numbers 123 and 456.) Input, perhaps provided by a keyboard or mouse, or both, empower programs with the ability to calculate answers to specific problems that a human is encountering. Nearly all programs with which you interact involve input provided by humans. 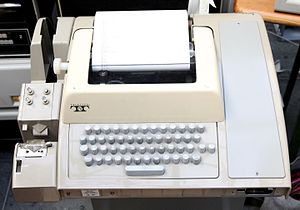 A teletype machine (or teleprinter) is an electromechanical device that can be used to send and received typed messages over a distance. It was one of the first devices that enabled the layman, not trained in Morse Code, to communicate easily with another. It included a keyboard for use by a human operator. In addition to the expected alphabetic and numeric characters, it contained a series of non-printable characters to control the conversation. The most common of these are:

In a similar manner to the way the print function advances the cursor when printing, reading from a stream of data advances a pointer from one character to the next.

Reading a Single Line of Text[edit]

The readLine() function enables us to (unsurprisingly) read a single line of text from the console. The signature is:

All the characters entered up to (but by default excluding) the newLine character will be returned. For example, given the code:

But note that the return type from readLine() is String?, an optional string. Under what circumstances would the return value be nil? readLine() will return nil if (and only if) the end-of-file marker is encountered when beginning a readLine().

As a consequence, we'll need to ensure that the result of a readLine() is not nil before we access the value. By now, this should be a familiar paradigm:

Let's take a closer look at this code:

We're taking four distinct actions with regard to readLine():

We can add some syntactic sugar to accomplish all these actions in one line, using a construct called if-let:

In the above code, line 1 performs the following:

Note that in this case, on line 2, there is no need to unwrap (bang) the variable because it is already of type String, having been unwrapped in line 1.

The above loop continues until the user types CONTROL-D.

Be Kind, Use a Prompt[edit]

It's generally considered to be rather rude to simply pause a program's output without informing the user that the program is waiting for them to do something. So, be kind, and let the user know what it is that they're being asked to do. The message that is displayed to the user in this case is called a prompt. Rewriting the above with a prompt: 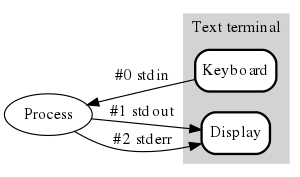 By default, a user's console input from a keyboard is fed to a program through the standard input stream. This stream of data is established by the operating system and connected to the running program automatically.