From Coder Merlin
Jump to navigation Jump to search 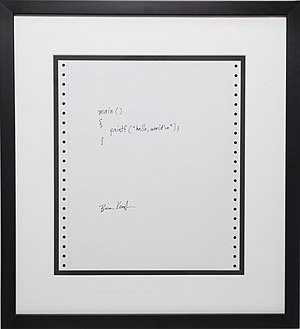 A Brief History of the Hello World program:

In the 1970s, Brian Kernighan was a computer scientist at Bell Labs, developing UNIX along with other famous computer scientists such as Ken Thompson and Dennis Ritchie, who created the programming language C. In a 1974 internal memo at Bell Labs, Kernighan created the Hello, World program as a simple demonstration of the input/output capabilities of the programming language B. Later, when Kernighan and Ritchie published their first book on C programming, The C Programming Language, the Hello World example found its way in and became instantly famous as a sort of 'first program' to write.

A Hello world program is simply a program that prints the text "Hello, World!" or some variation thereof to some kind of output device for the user. It is commonly used as a sample program, and is often the first program taught to students.