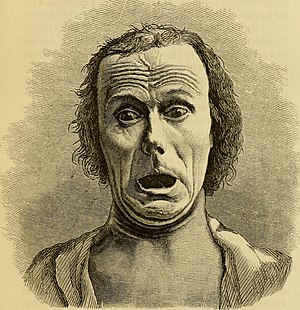 The expression of the emotions in man and animals (1872)

An expression is a finite series of symbols that is well-formed according to agreed upon rules. The symbols may include constants, variables, operators, and brackets. A valid expression will yield a value of a specific type according to the rules of the language.

All expressions, when evaluated, yield a particular type. For example, in the expression:

y will be of type Double, which is a double-precision, floating-point type. Because Swift is a type-safe language, all expressions will always have a specific type. Type-safety enables the compiler to warn us when we make a mistake, such as by using an Int when we intended a Double. Like many other type-safe languages, we're able to explicitly specify the type of a constant of variable:

We're able to use explicit typing to ensure that we're evaluating the expression as the desired type as in the example above. However, in most cases, Swift allows us to be more brief, and rely on type inference. Type inference will rely on the literal value(s) or named value(s) to determine the type. Let's look at a few examples:

In addition to decimal, literal integer expressions Swift will also infer the Int type from binary, octal, and hexadecimal:

Floating point numbers may be specified in decimal or in hexadecimal. Decimal numbers may have an optional exponent (indicated by e or E), which means that the base number is multiplied by

Hexadecimal numbers may also have an optional exponent (indicated by p or P), which means that the base number is multiplied by

Note that for literal constants, Swift will interpret the expression as a Double if any of the component expressions evaluate to a Double. ⚠ This does not apply to named constants.

Both integers and floating point numbers may have leading zeroes and embedded underscores for easier reading (by humans).

A series of characters embedded within quotes will be inferred to be of type String:

In programming, operators provide us with the ability to write many expressions in a manner generally familiar to us from algebra. Operators can be grouped by arity, that is, the number of operands on which the operator will function. For example, the expression 4+5 makes use of a binary operator (addition) which takes two operands, in this case a 4 and a 5. (An arity of one is often called unary while an arity of two is often called binary.)

Some common operators are listed in the table below:

Some languages also support compound assignment operators, that is, they perform an operation on an L-Value and then store the result in the same L-Value. For example, the statements:

assign the integer value of 9 to "x", and then increment "x" by 2, resulting in a new value for "x" of 11. This is exactly equivalent to:

We can use one or more operators with appropriate operands to form more complex expressions and assign the resultant value to a constant or variable:

The concatenation operator can be used to form more complex strings from simpler strings:

Retrieved from "https://www.codermerlin.com/wiki/index.php?title=W1037_Expressions_and_Operators&oldid=10402"
This page was last edited on 18 November 2020, at 19:09.
Privacy policy
About Coder Merlin
Disclaimers