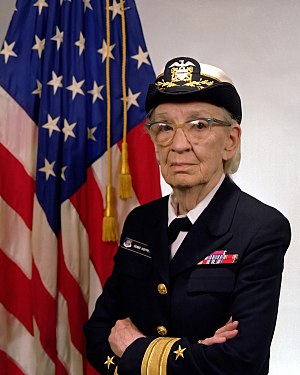 Commodore Grace M. Hopper, USN (covered)
|thumb|x400px|right|Grace M. Hopper]]
Contributors To Computer Science: Grace Hopper
Achievement: 29 March, 1944: One of the first programmers on the Harvard Mark I computer
Other: Grace Brewster Murray Hopper (née Murray December 9, 1906 – January 1, 1992) was an American computer scientist and United States Navy rear admiral.[1] One of the first programmers of the Harvard Mark I computer, she was a pioneer of computer programming who invented one of the first linkers. Hopper was the first to devise the theory of machine-independent programming languages, and the FLOW-MATIC programming language she created using this theory was later extended to create COBOL, an early high-level programming language still in use today.

"origin-usa" is not in the list (female, male, ireland, usa, jewish) of allowed values for the "Personal association" property.

Retrieved from "https://www.codermerlin.com/wiki/index.php?title=Grace_Hopper&oldid=15784"
Category:
This page was last edited on 21 October 2021, at 16:18.
Content is available under Attribution-NonCommercial-ShareAlike 4.0 unless otherwise noted.
Privacy policy
About Coder Merlin
Disclaimers